Population:- The population of Suffolk is around 800.

By rail: The nearest station is Belfast Great Victoria Street in the city centre.

Belfast International Airport is located at Aldergrove, around 13 miles west of Suffolk. George Best City Airport is situated to the northeast of Belfast, around 9 miles away.

In Ireland the traditional land divisions are “townlands”.  Suffolk is not a “townland” but the name is derived from Suffolk House that was located to the north of the village and “townland” of Dunmurry in County Antrim.  Until the end of the 18th century Dunmurry was largely an agricultural area dominated by wealthy landowners, who also set aside estates for hunting and pleasure.  This was the beginning of Suffolk.

Early in the 17th century the Chichester family received land for services rendered to the Crown.  This family originally came from Devon, England.  Sir Arthur Chichester became Lord Deputy of Ireland from 1604 to 1615 and was raised to the peerage of Ireland.  After the expulsion of the Catholic earls from Ireland in 1607 following their defeat by the Protestant English, Chichester became a leading figure in the Plantation of Ulster, i.e. the settlement of Ulster by Protestant tenants.  The land he received extended northward along the Lagan Valley and included the Dunmurry “townland”.  Chichester’s nephew inherited the land and became the first Earl of Donegal.  Subsequent earls set aside the land around the Colin Glen in the Lagan Valley to the north of Dunmurry as good hunting ground.  The 5th Earl of Donegal (1757-1799) in 1760 began the construction of a Georgian house overlooking the glen which was named Suffolk House.  The hills and glens around Suffolk House were heavily wooded and full of game.

The sources do not explain why the name was chosen.  However, this can certainly be related to the association of the earl’s wife with that county in England where she had lived as a young girl.  His wife (whom he married in 1761) was the Lady Anne Hamilton (1738-1780), daughter of the Duchess of Hamilton.  The Duchess of Hamilton came from Rendlesham in Suffolk and when her husband died in 1743 she remarried (1751) and lived at Easton in Suffolk.  So her daughter, Lady Anne Hamilton, lived in Suffolk from the age of 13 to 23 (1751 to 1761), and presumably had fond memories of the county.  The earl (later entitled the Marquess of Donegal) himself acquired Butley Priory and the Manor of Staverton in Suffolk as a residence and land for shooting parties. The development of Suffolk as a community is entirely related to the linen industry and the family of McCance.  The Colin Glen was a perfect location for linen production and the bleaching process that turned the brown linen white.  During the 18th century Ulster was to develop into the most thriving and prosperous province in Ireland.  This was directly due to the growth of the linen industry.  David McCance (1684-1747) appears to be the first of the McCances to move into the Dunmurry area.  His grandson, William McCance (1746-1810), was already involved in the linen trade when he leased land and water rights on the Suffolk Estate in 1793.  He occupied Suffolk House and started a “bleach green” there.  (A “bleach green” is the grassy field over which the linen is spread for bleaching.)  His nephew, John McCance (1772-1835), came to work for him, and as William never married he left the estate to John.

Following the death of his uncle in 1810, John McCance became the owner of Suffolk Estate and Suffolk House.  (Buying it from the Donegal family, despite a story about the Marquess of Donegal losing it at cards.  However, the 2nd Marquess of Donegal was a lifelong gambler, and he died heavily in debt in 1844, so this story could have an element of truth.)  John McCance was the real “founder” of Suffolk.  He expanded its activities by purchasing land adjacent to the estate, and in 1819 he inherited Glenville, further up the valley, from his cousin.  A mill was constructed on the new acquisition; this mill existed on today’s Suffolk Road and became a building for small business units until it was demolished a few years ago.  A modern block of shops and offices is now on the site of the mill.  It was John McCance who was responsible for building the linen operation into a successful thriving business.  With his increased prosperity, John McCance extensively rebuilt Suffolk House in 1824 into a Victorian mansion.  The introduction of this local industry brought changes to settlement patterns as other outhouses supporting the linen trade and residences for the workers were constructed near to their source of income.  These stretched along the track leading north from Suffolk House to the mill, which became today’s Suffolk Road, and in the early 19th century the community became known as the “village of Suffolk”.  The Suffolk Estate Company was incorporated in 1879 and it undertook to improve the land, premises, roads, sewers and fences, and to introduce shops, offices, gardens and water rights to this community.  A new company called the Suffolk Linen Company Limited was formally incorporated in 1882 and took over the running of the linen business.

At the beginning of the 20th century Belfast was the world’s largest producer of linen, and Suffolk was very much a “linen-village” being completely dependent upon the one product.  However, the rise of mass-produced cotton clothing after World War I brought a rapid decline in the linen industry.  Suffolk House was last lived in by the McCance family in 1923 and the family began to sell off parts of their land.  Suffolk remained very much a depressed village until after World War II when it became government policy to provide overspill housing for the expanding population of the major cities.  In 1951 an order for 1500 housing units to be built between Belfast and Lisburn led to 22 acres being acquired at Suffolk, and by 1956 it had become an outer suburb of the city of Belfast.

The end came for the Suffolk Linen Company when it closed in 1932.  The old linen mill on the Suffolk Road became a factory for a fruit company for some years, then was sold to the Pigs Marketing Board as a bacon factory, employing around 300 people.  A shortage of pigs forced this operation to close in 1976 and, in 1981, the old mill was taken over by the local welfare committee to convert the building for small business units until the end of its useful life.

Suffolk House was lived in by a Mr Gaffikin from 1923 to 1927.  It then stood empty for 10 years until bought by a Mr Cameron in 1937.  Mr Cameron leased part of the house and some of the rooms were used to store food during the Second World War.  In 1945 a wing of the house was leased to an Austrian refugee named Otto Harriman (who lived in London).  He and his wife established a small business, Ulster Pearls Ltd, making artificial pearls.  It had the distinction of making the pearls used on the Queen’s wedding dress.  This business employed up to 160 workers.  Around 1958 part of Suffolk House was demolished to make way for road improvements.  The remaining building continued as the pearl factory into the late 1960s.  Eventually, the remaining part of Suffolk House was demolished and the site is now a housing development (Margaretta Park), although much of the grounds still remain as part of the Colin Glen Park. 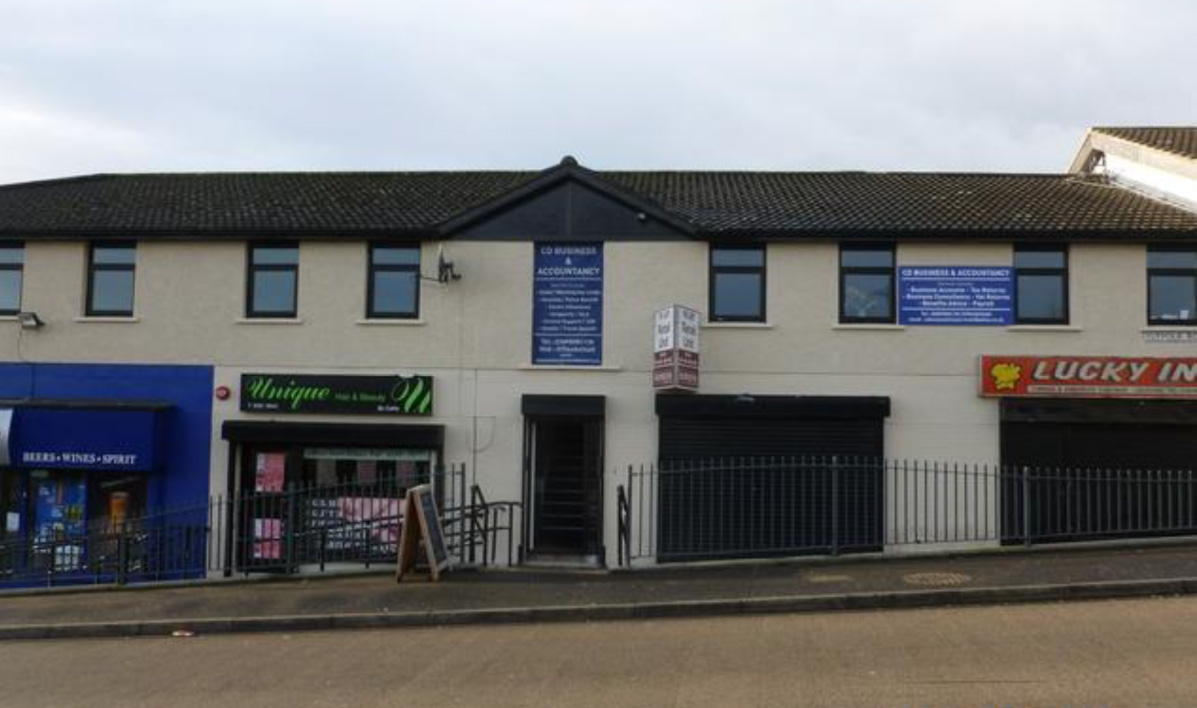 To the north of where Suffolk House was located, a small development of nine units comprising a convenience store, off licence, four retail outlets and two upper floor offices has been built at the top of Suffolk Road.  This development has been given the name of the former mansion in its address: Suffolk House, 252-260 Suffolk Road, Belfast (see photograph, right).

Meanwhile, polarisation of the two communities in Northern Ireland in the early 1970s transformed Suffolk into a small Protestant enclave inside predominantly Catholic West Belfast.  Stewartstown Road, a major arterial route through West Belfast, separates Suffolk and Lenadoon estates and represents a dividing line between the two communities where most of the outbreaks of violence in the area have taken place.  The impact on Suffolk was such that it experienced low housing demand, outward migration, and extensive vacancy of commercial properties.  Since 1998 the Stewartstown Road Regeneration Project has been established which is an inter-community regeneration initiative located on the interface between the (Protestant/Unionist) Suffolk and (Catholic/Nationalist) Lenadoon that aims to regenerate and revitalise both communities.

(We would like to thank Gary, who has lived in this community all his life, for the corrections and additional information regarding the History of Suffolk, Belfast.)

Suffolk is located in the west of Belfast, the capital city of Northern Ireland. The name derives from the Irish Béal Feirsde or Feirste, which means “mouth of the sandbar”; a reference to the sandbar that formed at the confluence of the Lagan & Farset rivers, at what is now Donegall Quay.

Belfast was established as a town in the early seventeenth century at the time of the Plantation of Ulster; an organised period of colonisation by wealthy landowners from Britain that began in 1606. Belfast flourished as a commercial and industrial centre in the 18th & 19th centuries due to the growth of the linen industry. Other major industries during this period included rope-making, tobacco & shipbuilding; the Harland and Wolff shipyards becoming one of the largest shipbuilders in the world, employing up to 35,000 workers in its heyday. It was here that the ill-fated Titanic was built.

Belfast was granted city status in 1888. With the formation of the Irish Free State, Belfast became the capital city of Northern Ireland in 1921.

Today Belfast covers an area of 44.4 square miles, which straddles the border between County Down & County Antrim. The population of the city is around 267,500, whilst the Belfast Metropolitan Area, which includes commuter towns & outlying areas such as Lisburn & Carrickfergus, has a population of more than 641,000.

The western part of Belfast, in which Suffolk is situated, is in County Antrim. The name Antrim (Irish: Aontroim) means “Solitary Dwelling”. The county takes its name from the town of Antrim, around 22 miles northwest of Belfast. County Antrim has land borders with County Derry/ Londonderry to the west & County Down to the south. It also has water boundaries on Lough Neagh with County Tyrone & County Armagh. the county include the Giant’s Causeway (see photo, left); an area of about 40,000 basalt columns created 50 to 60 million years ago, on the north coast of Ireland. It was named a World Heritage Site by UNESCO in 1986, & a National Nature Reserve in 1987.