Lying seven miles south of Winifred, both Suffolk and Winifred are railway towns established in 1913.  Suffolk is no more than an isolated group of homesteads while Winifred, although the main settlement for this region, had a population of 208 (2010) serving the larger agricultural community of the surrounding countryside.

Rural settlement took place in the 1880s with isolated ranches, and no nearby local nucleated settlements.  Communications were basic and the coming of the railroad opened up the possibility of greater mobility.  The Chicago, Milwaukee & St Paul railroad crossed Montana in 1909, and in 1911 it was proposed to run a branch line northward from Grass Range through Roy to the farmlands near to the Missouri River.  The locations of town sites were announced in July 1912 and the line was built in 1913.  In December 1913, Charles A Goodnow, the VicePresident of the railroad, named Suffolk and, a little further north at the terminus of the line, Winifred.

Some sources state that Suffolk is named after a ranch, but there is no record of a ranch of this name in the vicinity, nor is it the type of name usually borne by Western ranches.  The most authoritative sources state that Suffolk was named after the county in Massachusetts, the state from where C A Goodnow came.  This follows a known pattern.  The following railway towns in Fergus County, Montana, were all named after their Massachusetts counterparts by C A Goodnow: Amherst, Danvers, Hanover, Hoosac, and Ware. 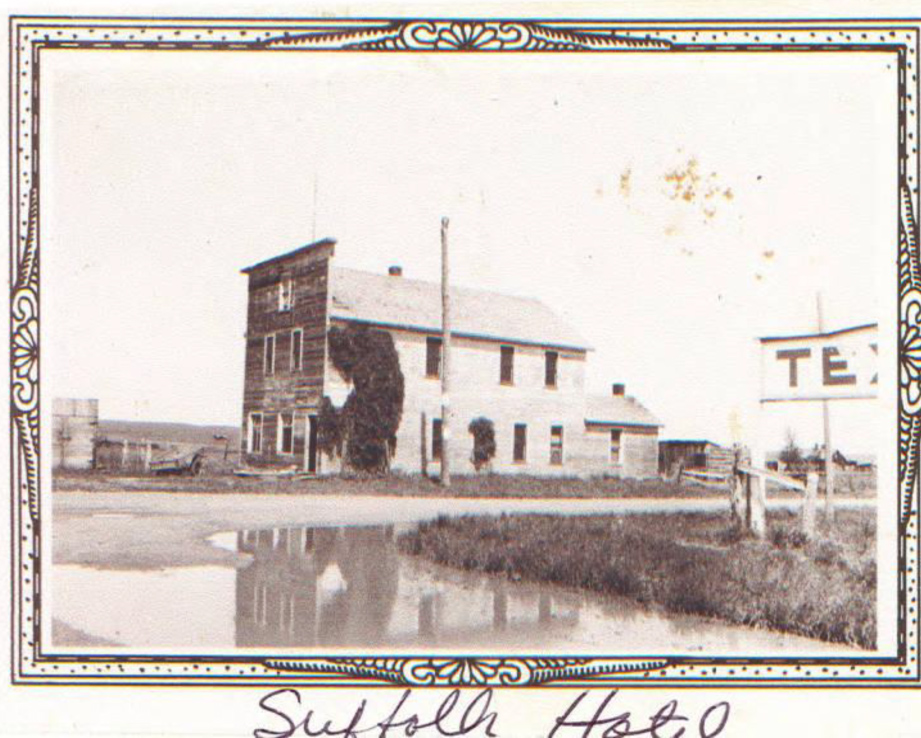 Suffolk never grew into a town and its population never exceeded 100 residents.  Nevertheless, it survived as a thriving community for a while with three passenger trains a week and even a hotel (see photograph, right).  However, the branch line was not profitable; there was neither the population nor the freight from the few grain elevators to keep it busy.  Finally, in 1980, the line was abandoned.  Suffolk had a post office from 1914 to 1975.  By 2019 it had declined to 9 or 10 households scattered around the old town site.

Suffolk is situated in Fergus County in central Montana. It is bordered to the south by Wheatland, Golden Valley & Musselshell counties, to the north by Chouteau, Blaine & Phillips counties, to the west by Judith Basin County & to the east by Petroleum County. The population of the county in 2019 was 11,221. The county seat is Lewistown with a population of 5,885 (2019), which is around 30 miles south of Suffolk. The county was created in 1885 & named after James Fergus, a delegate to the Fourteenth Legislative Assembly of the Montana Territory. Charles M. Russell National Wildlife Refuge (see photo, right): Named after the famed painter of the American West, the refuge was established in 1938 around Fort Peck Reservoir & along the Missouri River. It covers 1,100,000 acres & extended for 125 miles. It contains the largest population of bighorn sheep outside the Rocky Mountains, as well as a wide variety of other flora & fauna.

Lewis & Clark National Forest: Named after Meriwether Lewis and William Clark, whose expedition in the early nineteenth century was the first to the Pacific coast, this 2,800 square mile area of forest land was first protected in 1897. It is divided into two separate habitats; grass & shrublands in the east, with mountainous coniferous forest wilderness in the west. Both black & grizzly bears, wolves, mountain lions & lynx are found in the western section. The forest has numerous camping grounds, two ski areas & excellent rivers for fishing.